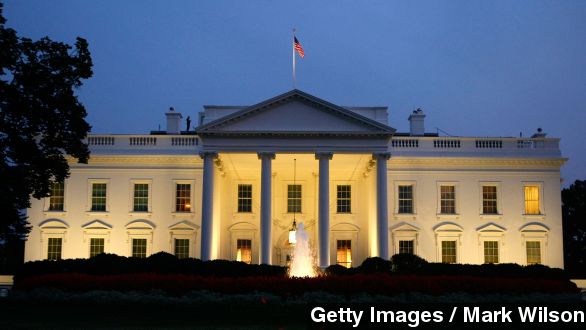 The incident had agents searching the grounds for the rest of the morning to make sure there was no threat. The Secret Service said an agent heard and saw a small drone flying low to the ground around 3 a.m. (Video via Fox News)

It isn’t clear how the drone got past the perimeter security around the White House, and while the Secret Service obviously took the breach seriously, jokes were inevitable.

"Maybe it’s from Mars. Maybe someone’s going to pop out and say, 'I have the answer!'," said Whoopi Goldberg.

"That would be awesome!" said Stacy London.

"Wouldn’t that be great?" said Goldberg.

President Obama and the first lady are both overseas on a trip to India, though both of their daughters were still at the White House at the time the drone was spotted. (Video via The White House)

The Secret Service issued a press release saying the drone was a 2-foot "quadcopter."

That simply means it had four propellers like this drone, though the other specifics of what the drone looked like or how it was operated weren’t released. (Video via Youtube / Yudha Hanottama)

CNN’s law enforcement analyst said the incident now poses an interesting problem for the Secret Service if someone ever tries this again without the drone crashing.

"Do you want a small army of Secret Service agents on the lawn firing at one of these things trying to shoot it down and have the bullets landing all over Washington, D.C.? The ones that miss?," said Tom Fuentes.

This incident follows a security breach only a few months ago when a man hopped the White House fence and made it well onto the grounds and even inside the front door.