Secret Service Agent Robbed Of His Badge And Gun 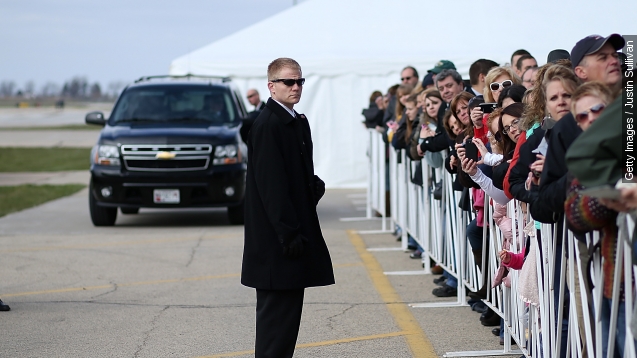 2015 hasn't been a stellar year for the Secret Service, and the agency's apparently not ending it on a high note.

CNN reported an agent was robbed of his gun and badge as well as a radio, a pair of handcuffs and an encrypted flash drive in the middle of the afternoon on Monday.

The equipment was in a bag in the agent's car, which was parked right next to Secret Service headquarters.

This is yet another black eye for the Secret Service, which has made headlines much more than a supposedly "secret" organization should.

The House Oversight and Government Reform Committee said the Secret Service is an "agency in crisis" after a review showed there were 143 breaches or attempted breaches of areas defended by the organization in the past 10 years. (Video via the White House)

The report said the agents are overworked and offices understaffed. It also called into question the Secret Service's leadership after several incidents of agent misconduct.

In March, two Secret Service employees suspected of being drunk drove into a barricade during an active bomb threat. Just last month, an agent working at the White House was charged with soliciting sex from a minor. (Video via House Committee on Oversight and Government Reform)

And several other agents were disciplined after reports surfaced that agents had solicited prostitutes while in Colombia during President Obama's 2012 visit to the country. (Video via Presidencia de la República de Colombia)

During the House investigation into the misconduct, agents used secure servers to access and share the rejected Secret Service application of the Oversight Committee's chair, Jason Chaffetz. (Video via ABC)

So all the scrutiny hasn't kept the Secret Service from running into some major issues. Officials said the theft isn't expected to be a threat to the agency, but the agent who was robbed could face suspension for up to a month for losing his weapon.