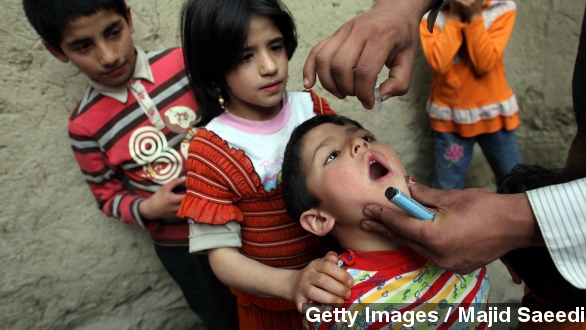 SMS
Second Polio Strain Possibly Eradicated, What's Next?
By Jasmine Bailey
By Jasmine Bailey
November 17, 2014
It's been two years since any new cases of poliovirus type 3 have been reported, meaning it could be eradicated.
SHOW TRANSCRIPT

In what researchers are calling  a "historic milestone," poliovirus type 3 might be completely eradicated — there have been no new reports of the strain in two years.

According to the Centers for Disease Control and Prevention, if a strain of polio has not been seen worldwide in three or more years, it can then be considered eradicated. This month brought the two-year mark.

A quick clarification — there are three known strains of the poliovirus: types 1, 2 and 3.

Type 2 was officially stamped out in 1999, but type 1 is still spreading rampantly throughout Nigeria, Pakistan and Afghanistan.

Breitbart reports Pakistan, in particular, has reached troubling and record-breaking numbers, topping 200 people infected with the debilitating virus in 2014. Polio can lead to irreversible paralysis and even death.

Now, with that being said — the chance of completely ending the spread of polio is still very possible.

"We're this close." In 1988 the Global Polio Eradication Initiative was launched with the goal of creating a polio-free world. Currently 200 countries are involved in the effort. (Video via Rotary International)

And as the World Health Organization notes, since the initiative began, "polio case numbers have decreased by more than 99% (with only 416 polio cases reported in 2013)."

EDUCATION PORTAL: "This virus is spread from person-to-person via the horizontal transmission route. Such as when someone ... is around someone who sneezes or coughs out this virus, drinks water contaminated with a sick person's feces or eats food with the virus on it."

And in the three countries where the transmission of polio has never stopped, sanitation is poor, health care systems are weak, and as mentioned earlier, there's a lack of knowledge about vaccinations, which can be critical in stopping the virus.

However, the Global Polio Eradication Initiative has a long-term plan to increase vaccinations. Set to run through 2018, the plan spotlights Nigeria, Afghanistan and Pakistan, and the organization says the program has shown positive results so far.

The possibility of eradicating polio in the coming years is significant, especially considering the virus is believed to have been around since prehistory. Ancient Egyptian artwork depicted what looks like people infected with polio.

This video includes images from Getty Image and Tom-B / CC0 1.0.