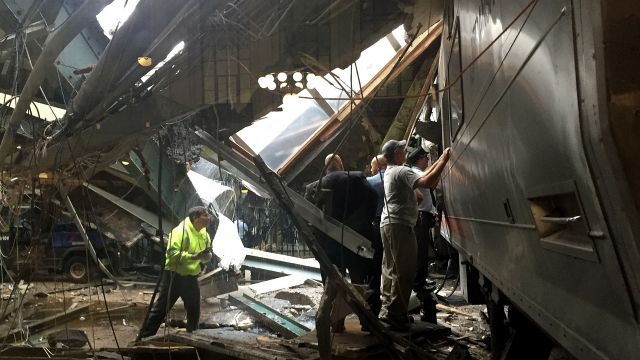 SMS
A Black Box Too Dangerous To Access Is Key To Solving Hoboken Crash
By Ryan Biek
By Ryan Biek
October 3, 2016
Authorities investigating Thursday's train crash in Hoboken, N.J., are having to rely on one event recorder.
SHOW TRANSCRIPT

Authorities investigating the cause of Thursday morning's train crash in Hoboken, New Jersey, still need to recover a black box from the scene. According to the National Transportation Safety Board, that event recorder — which is located at the front of the train — is still too dangerous to access.

The train's other data recorder has already been retrieved, but it wasn't working when the accident happened.

If the black box at the front of the train is defective, as well, New Jersey Transit could have a federal issue on its hands.

These boxes are supposed to record how fast the train was going at the time of the crash. The train's engineer said it was traveling at 10 mph when it entered the station, though experts told NPR it would have had to have been going 20 mph or more to crash through the barriers that it did.

The train's engineer says he has no memory of the crash and woke up on the floor after the accident. He told investigators his cellphone was turned off and stored during the trip.