Seattle: Come For The Coffee, Stay For The Handsome Men 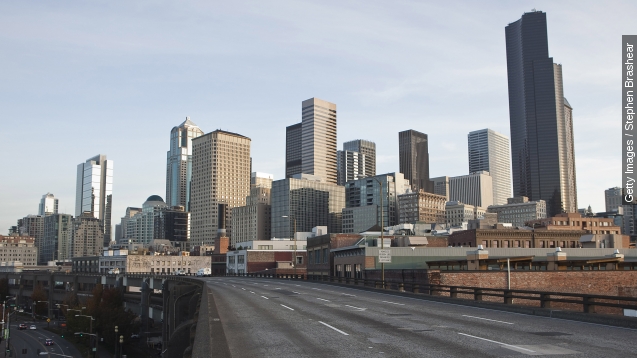 SMS
Seattle: Come For The Coffee, Stay For The Handsome Men
By Ryan Biek
By Ryan Biek
July 17, 2015
The rain might not seem so bad now that Seattle has been named the city with the most handsome men. Check out the rest of the cities making the list.
SHOW TRANSCRIPT

Women pack your things for Seattle. If not for the Starbucks, then head there for the attractive guys.

According to a national survey by men's grooming supplier Grooming Lounge, Seattle is tops among U.S. cities for attractive men.

We're beginning to understand why this movie did so well. (Video via TriStar Pictures / "Sleepless in Seattle")

But before you cancel your lease, perhaps unsurprisingly, the study done by the grooming company had mostly criteria related to — you guessed it —  grooming.

In fact, only one of their criteria didn't involve the amount of money spent on grooming products. So at least Seattle is fit.

On the flip side, Cleveland spent the second most on grooming products, yet somehow came in 24th place. Maybe everyone was too busy watching basketball to actually go out and play basketball.

"Can I say something though? Where are the Southern men?" Amy Robach of ABC asked.

That's a great point. Maybe you prefer men in between the coasts, or better yet, men who don't spend more than a 90s boy band on their hair.

We've taken the liberty to come up with some new number ones.

Then Memphis is your spot. The largest Bass Pro Shop in the country just debuted in the Memphis Pyramid in May.

Or maybe your issue was with the points given by Grooming Lounge to the clean shaven.

WSYR reported in June Washington D.C. takes the crown when it comes to bearded cities. They wondered if it was all the statues of bearded men.

You're right. These criteria seem just as ridiculous as that grooming study. Maybe we should just go with the tried-and-true saying, "strength in numbers."

San José did have the highest ratio of single guys in the country last year. We're guessing some of them are pretty well-groomed too.