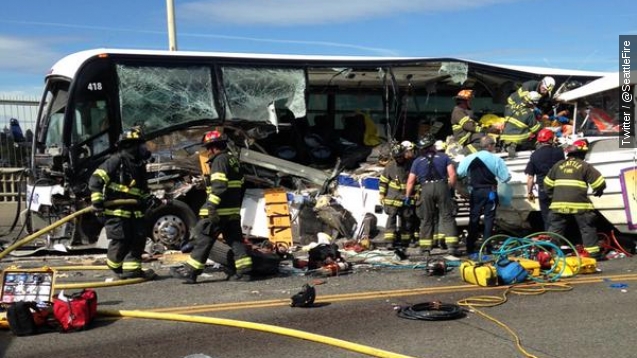 SMS
Seattle Bus Crash Kills 4, Injures Several On Bridge
By Christian Bryant
By Christian Bryant
September 24, 2015
A Ride the Ducks tour vehicle and another tour bus collided on Seattle's Aurora Bridge. At least four were killed and at least 12 were injured.
SHOW TRANSCRIPT

At least four people are dead and at least 12 are in critical condition after a crash in Seattle, according to the city's fire chief.

A Ride the Ducks tour vehicle and another tour bus collided Thursday.

"The Duck was in the far right lane going northbound, and it seemed to start to weave towards the middle lane. ... He overcorrected to get away from the barrier and shot across all five lanes, or four lanes," an eyewitness told KIRO.

The Seattle Fire Department reports approximately 50 people have been evaluated for injuries.

This video includes images from Bernt Rostad / CC BY 2.0 and Johan Wieland / CC BY ND 2.0.