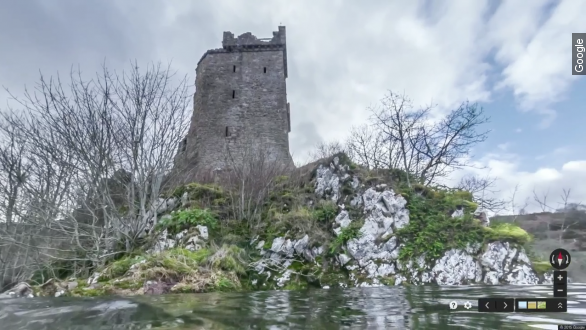 Google is joining the search for the Loch Ness monster.

Eighty-one years ago, this blurry, vague photo — supposedly showing a monster in the Scottish Loch Ness — was released, setting off one of the biggest legends, and hoaxes, of our modern age.

Google celebrated the anniversary of the Loch Ness monster photo with this playful Google Doodle and something else — some new Street Views of the Loch itself.

"Loch Ness is a lost world. But it is accessible through technology," says Adrian Shine.

That's right, Google Street View, which already lets folks take virtual tours of ocean floors or the pyramids, is now available for the Loch Ness, presumably so people can strain their eyes, looking for anything that may resemble ol' Nessie.

Google announced the new view on its blog, along with a video monologue by Adrian Shine, leader of the Loch Ness and Morar Project. According to Google, he's logged more than 1,000 hours searching for the beast.

"It's the sort of place that, if there weren't any dragons, there really ought to be," Shine said.

Google also points out that Web searches for Loch Ness trump other searches for places in the U.K. less associated with hoaxes, such as Buckingham Palace or the Peak District National Park.

This video includes images from Getty Images, Daily Mail and music from Fantasy World / CC BY 3.0.