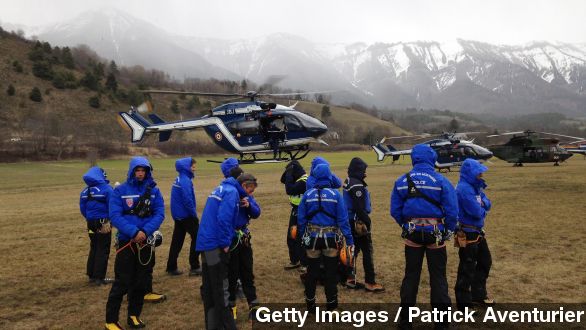 SMS
Recovered Black Box Could Shed Light On Germanwings Crash
By Jake Godin
By Jake Godin
March 24, 2015
Rescuers continue to search the wreckage of a Germanwings Airbus A320, which crashed in the French Alps on Tuesday.
SHOW TRANSCRIPT

The search for Germanwings flight 4U 9525.

Search efforts are underway for what remains of an Airbus A320 that crashed in the French Alps Tuesday.

Why Germanwings flight 4U 9525 went down remains unknown, but the black box that has reportedly been found may shed some light on what exactly happened.

Both Germanwings and its parent company, Lufthansa, report there were 144 passengers and six crew members aboard the flight, which was on its way from Barcelona, Spain to Dusseldorf, Germany.

French President Francois Hollande made a speech shortly after the crash announcing the chances of there being any survival in such a crash was unlikely. All are believed to have died.

According to Spanish media, there were 45 Spaniards aboard the plane. Officials haven't released passengers list, but a Germanwings official estimated there were 67 Germans on board.

The rough terrain of the French Alps has hampered search efforts, and there is no direct road leading to the crash site. A mountain guide who spoke to BFMTV said the scene he searched was full of only bits and pieces.

A video released by Francetv Info showed other climbers searching a debris-filled wreckage site. Very little of the plane can be seen wholly intact.

Tuesday's plane crash is likely to be the worst airline accident to happen on French soil since 1981 when an Adria Airways plane crashed in Corsica and killed all 180 people on board.