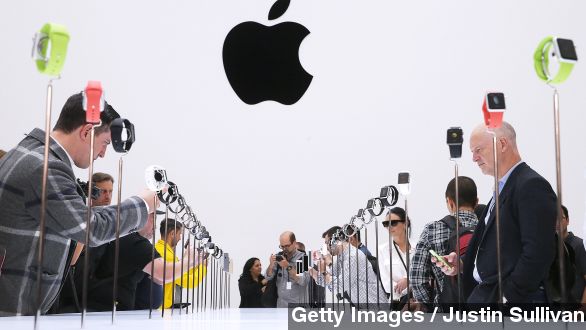 We're getting closer and closer to the unknown release date of the ambiguous Apple Watch. But like most things from the tech giant, as the days go by, the rumor mill begins to swirl.

Wednesday morning, 9to5Mac published screen shots and details from what it says is the companion app for the Apple Watch, officially set for release in early 2015 — whatever that means.

The leak mostly provides some clarity and visuals to go along with features we knew would be included on the new device.

According to a commercial for the watch, "The activity app on Apple Watch measures three separate aspects of movement."

Since the unveiling of the Apple Watch back in September, observers have known Apple would emphasize the health and fitness component of the new device.

That's likely meant to compete with the Fitbits and Jawbones of the world.

The report says with the companion app, users will be able to set reminders to stand up if they've been sitting for close to an hour, as well as get progress updates and notifications for goal completions, weekly summaries and more.

We knew the Apple Watch would not have a keyboard, meaning Apple Watch users would respond to texts with voice dictation or actual audio messages. The screen shots show that users can set a preference from within the companion app.

One big unknown concerning the Apple Watch was whether it would contain usable storage space for pictures, music and apps like the iPhone. (Video via Apple)

9to5Mac reports the "about" screen for the companion app will show things like storage capacity, the amount of songs and photos and the number of installed apps, which suggests the Apple Watch will have some digital storage available.

Though Apple has not set an official release date for the new Apple Watch, it is rumored we can expect it on the market in March.