SCOTUS To Decide If Facebook Threats Are Protected Speech 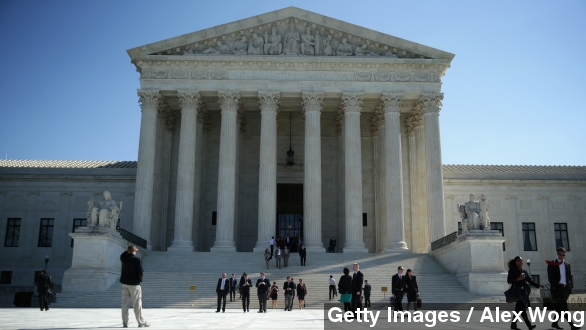 SMS
SCOTUS To Decide If Facebook Threats Are Protected Speech
By Ben Lawson
By Ben Lawson
December 1, 2014
The Supreme Court is hearing a case Monday that will force it to determine if threats made on Facebook are protected by the First Amendment.
SHOW TRANSCRIPT

The U.S. Supreme Court is looking at how the First Amendment applies to threats made on Facebook and other social media sites, where the writer's intent is not always clear.

The case starts Monday, and it involves Anthony Elonis, a Pennsylvania man who was sentenced to nearly four years in prison for statements he made on Facebook that prosecutors say were threats, both to his estranged wife and to an FBI agent.

In October 2010, Elonis posted, "There's one way to love ya but a thousand ways to kill ya, And I'm not gonna rest until your body is a mess, soaked in blood and dying from all the little cuts." Court documents reveal several more posts along the same lines, including one about the "most heinous school shooting ever imagined."

But Elonis argues his posts are artistic expression inspired by rappers like Eminem, who makes threats against his ex-wife in one of his songs. (Video via BBC)

Elonis and his lawyers say the court's decision should have been based on whether Elonis actually intended to carry out any acts of violence.

Pete Williams lays out the defense's argument for MSNBC.

The Supreme Court took the case to clarify what the government needs to prove when trying to charge a person for making threats. If it upholds the "reasonable person test," then words alone are enough to decide whether a statement is a threat.

But if they decide subjective intent also needs to be examined, the specific actions of the defendant need to be taken into account. The Atlantic boils it down like this: "If Elonis had sent the threats to the targets by mail, there would be little doubt of his intent. If he had written them in a diary that was discovered by accident, there’d be little doubt that they were protected."

Which brings Facebook and other social media into play. The context, not just the content, of the post would have to be determined, and that requires an understanding of the medium.

Forbes writes there are three main challenges to this. First, signals such as an emoticon or an LOL could be used to establish intent. Second, posts before and after the one in question would have to be considered. Third, courts would also have to consider how the intended audience would interpret the post, because it could be a meme or inside joke.

All of this could be difficult for someone unfamiliar with online communities to understand, and the Supreme Court isn't exactly made up of techies.

Anyone who's spent time on the Internet knows just how many inflammatory and sometimes frightening statements get made. Depending on how the Supreme Courts handles this case, the worst of those statements could be deemed illegal. A decision is expected sometime this summer.