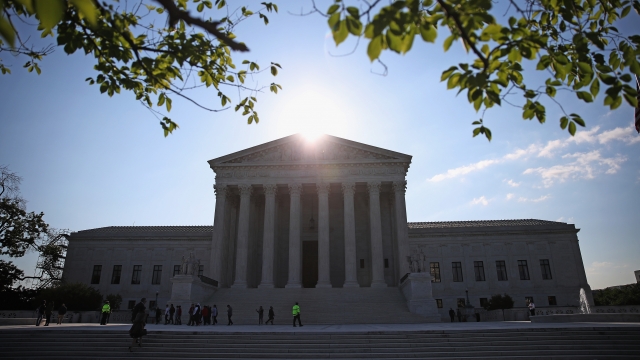 SMS
SCOTUS Punts Contraception Mandate Back To Lower Courts
By Katie Link
By Katie Link
May 16, 2016
After hearing arguments, the eight justices decided not to rule, handing the case back to the lower courts for compromise.
SHOW TRANSCRIPT

The Supreme Court is playing hot potato with a hot-button issue: mandated contraception coverage. On Monday, the justices unanimously agreed to pass the issue back down to the lower courts to be worked out.

The case, Zubik v. Burwell, was filed by religious groups who say they shouldn't be forced to provide insurance that covers contraception for female workers.

Under the Affordable Care Act, most businesses are required to do so. If they object, they can file a form with the government allowing the insurance company to step in to directly provide contraception coverage.

But one of the plaintiffs, a religious charitable group called Little Sisters of the Poor, says even filing that form violates its guaranteed religious freedom.

Back in March, the Supreme Court justices heard oral arguments on the case, then asked for more information from both sides, suggesting a compromise could be reached.

Monday's ruling seems to reinforce that the justices think a compromise can be reached without interference from the top court.

The opinion says: "The court expresses no view on the merits of the cases. In particular, the court does not decide whether petitioners' religious exercise has been substantially burdened, whether the government has a compelling interest, or whether the current regulations are the least restrictive means of serving that interest."

While most of the federal appeals courts that heard the case defended the Affordable Care Act's mandate, the opinion from the Supreme Court means the process will have to start over from scratch.

"Our concerns about the continued vacancy on the court persist. It's not obvious that an additional justice would have yielded a different result, but I haven't heard anybody make the argument that leaving the Supreme Court of the United States short-staffed is somehow good for the country," White House press secretary Josh Earnest said.

This video includes clips from WVLT and The Becket Fund for Religious Liberty and images from Getty Images.