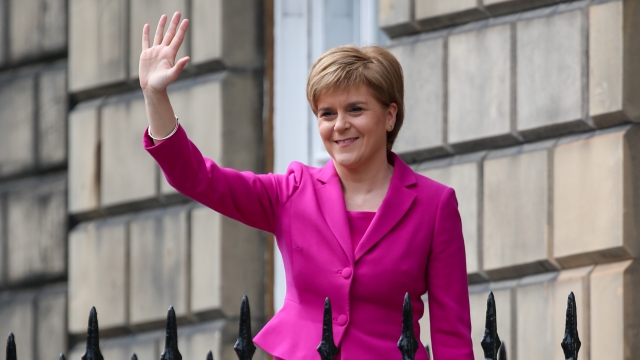 "What's going to happen with the U.K. is that there are going to be deeply damaging and painful consequences of the processes of trying to extricate the U.K. from the EU. I want to try and protect Scotland from that," Sturgeon told the BBC's Andrew Marr.

When asked, she said she could use the Scottish Parliament to block the United Kingdom from leaving the European Union, though whether Scotland's Parliament would have a true affect on a Brexit decision is still unclear.

That's because, for the U.K. to leave the union, it still needs to invoke Article 50 — formally telling EU leaders that the United Kingdom is planning on leaving — and, as Sturgeon put it, that's unknown territory for the U.K.

SEE MORE: "Europe's Far-Right Saw The Brexit And Now Wants Out Of The EU, Too"

In Thursday's Brexit referendum, 62 percent of people in Scotland voted to stay in the EU. That puts it at odds with Wales and England but on the same side as Northern Ireland.

And not long after the results were announced Friday, Sturgeon said a new Scottish independence vote was "highly likely." One new poll in Scotland found that 59 percent of Scottish voters would vote for independence now, just two years after Scotland voted to stay a part of the United Kingdom.

If Scotland does vote to remove itself from the U.K. before the country actually leaves the EU, Scotland could potentially become a successor state, meaning it would inherit the United Kingdom's EU membership and all the benefits that come with it.

This video includes images from Getty Images and clips from the BBC and the Scottish Parliament. Music provided courtesy of APM Music.