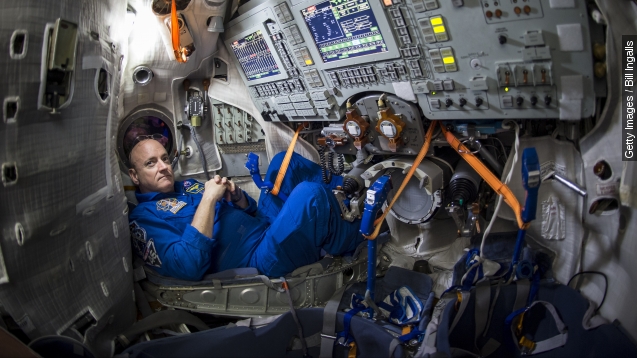 Astronaut Scott Kelly has officially spent more consecutive time in space than any other American.

Thursday he eclipsed Michael Lopez-Alegria's 2007 record of 215 days on a single mission, and the former record-holder tweeted his congratulations.

Kelly’s slated to extend his lead quite a bit. He's scheduled to return to Earth March 2, after 342 days in orbit.

He’s not just staying in space for a long time because he wants to feel like Matt Damon. Kelly’s actually there to see what effects prolonged space travel — like a journey to Mars — could have on a person.

“Some astronauts on long-duration space flights have had a degradation in their vision that is concerning. We’ve done a lot of research up here since I've been here to better understand that,” Kelly told CBS.

When he gets back, doctors will compare his health to his twin brother Mark's to see if the prolonged space flight had any adverse effects.

But if NASA wants to know what outer space can do to a body after a long time, it should just ask the Russians.

Cosmonaut Valeri Polyakov spent 437 consecutive days aboard the Russian Space Station Mir starting in 1994, and Gennady Padalka returned to Earth in September after spending 879 days among the stars over the course of five missions.

Scott Kelly already set the mark for most total time in space for an American earlier this month with more than a year off-planet.