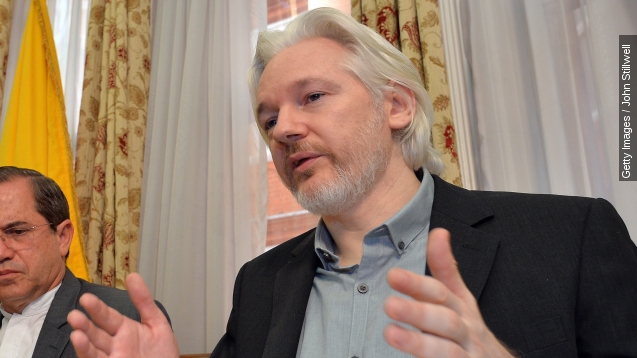 SMS
Scotland Yard Pulls 24/7 Police Watch Of Julian Assange
By Matt Moreno
By Matt Moreno
October 12, 2015
Police will stop waiting outside the Ecuadorian embassy near London where Julian Assange has asylum. The U.K. spent about $15 million on surveillance.
SHOW TRANSCRIPT

Wikileaks founder Julian Assange will no longer have 24/7 police surveillance at Ecuador's Embassy near London.

Since June 2012, Metropolitan police have patrolled the Ecuadorian Embassy where Assange has asylum.

But a recent report found the around-the-clock security has cost the government about 10 million pounds, or roughly $15 million.

And that's a big reason why the security was pulled. In a statement Monday, the Metropolitan Police Commissioner said the 24/7 watch was no longer "proportionate."

Assange is facing extradition to Sweden on a possible rape allegation. Scotland Yard said if Assange leaves the embassy, it will "make every effort to arrest him." (Video via Sky News)