Scores Killed, Up To 200 Injured In Yemen Mosque Attacks 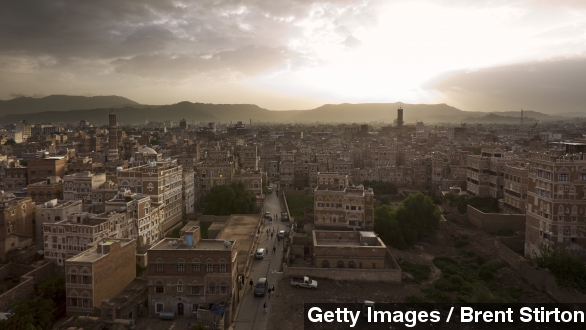 At least 126 are now believed dead and many more injured after suicide bombings in Yemen on Friday afternoon.

The attacks happened during the busy noon prayers in the capital city of Sanaa. According to France 24, two occurred at the Badr mosque in the south with one going off inside the mosque and a second going off at the gate as worshippers fled. A third went off at the al-Hashoosh mosque in the north. (Video via France 24)

The BBC notes the mosques were frequented by supporters of the Zaidi Shia-led Houthi rebel movement. The movement successfully wrestled Sanaa from government control in February.

Shortly after the attack, ISIS released an audio message and statement claiming responsibility. Though that's not been confirmed, ISIS has claimed to have a presence in Yemen since mid-November 2014.

Speaking to Foreign Policy, a senior editor with The Long War Journal says the attacks, if carried out by ISIS, would be "part of a campaign by ISIS to say that they are the real anti-Shiite jihadist force throughout the Middle East, and that al Qaeda is soft when it comes to anti-Shiite violence." (Video via Al Masirah TV)