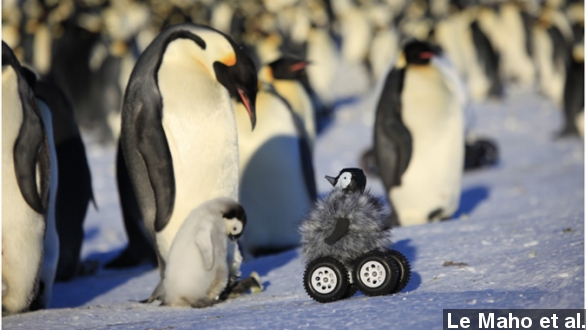 SMS
Scientists Use Penguin Look-Alike Rover To Study Penguins
By Matt Moreno
By Matt Moreno
November 3, 2014
Penguins are fairly shy creatures, so researchers sought a way to study them without scaring them.
SHOW TRANSCRIPT

It appears a group of scientists are subscribing to the "if you can't beat 'em, join 'em" strategy when it comes to studying penguins.

Scientists in France have created a robot penguin — equipped with wheels, a camera, and a fake look-alike — to help them get up close and personal with the feathery creatures.

The study, published in Nature Methods, focused on how to reduce the stress to penguins while researching them. The study notes, "Approaching wild animals to collect data on their phenotypic traits induces stress, escape behavior and, potentially, breeding failure and therefore jeopardizes the quality of the collected data."

When approached by humans, the penguins' heart rates shot way up — an average of 35 beats more a minute. They hoped the rover would change that.

Researchers tried a few different versions of the rover, including a fiberglass one that didn't work and scared the penguins. When the scientists finally got the latest model made, they got pretty impressive results — heart rates only increased about 24 beats per minute.

Study leader Yvon Le Maho of the University of Strasbourg noticed the penguins reportedly didn't flee from the device and even sang songs to it, though the penguin bot isn't equipped with sound and couldn't sing back.

Maho and his team studied penguins in the same area of Antarctica where "March of the Penguins" was filmed. Maho and his 40 years of researching penguins contributed to that movie.

Other researchers have tried out these faux-penguin cams before, though. In 2013, Discovery and BBC teamed up for a special called "Penguins: Waddle All the Way" where a camera-wielding robot penguin infiltrates various groups of penguins.

The researchers say they plan on using the device more in the future and will read signals from radio tags on the birds.