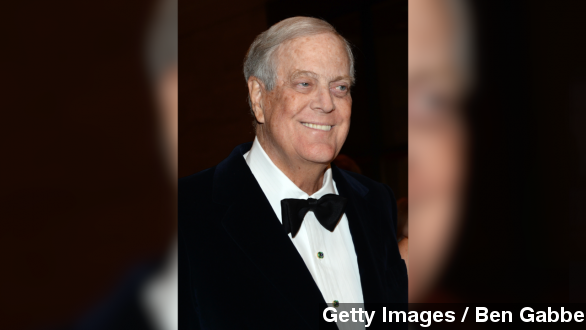 SMS
Scientists Urge Museums To Cut Ties With David Koch
By Christian Bryant
By Christian Bryant
March 24, 2015
Koch sits on the board of and donates to the Smithsonian museum, but scientist say his personal interests could damage the museum's reputation.
SHOW TRANSCRIPT

More than three dozen members of the scientific community launched a campaign urging museums of science and natural history to cut ties that would damage those museums' reputations. (Video via Smithsonian Institution)

Koch has donated to the Smithsonian museum, whose official position is that humans have contributed to climate change.

"We, as human beings, are having a very unique impact on these natural systems over and above what nature does. We are changing factors that affect the climate at a very rapid pace," said G. Wayne Clough, Secretary of the Smithsonian Institution.

But the scientists in the letter call Koch out for also donating millions to organizations that deny climate change.

In an open letter to museums, several scientists write that the integrity of these institutions could be damaged because of contradictions between the missions of museums and their sources of funding.

This letter comes after major climate change skeptic Wei-Hock Soon was outed for having accepted more than $1 million from the fossil fuel industry. Soon never disclosed those connections in many of his scientific papers on global warming. (Video via Greenpeace)

But it's not clear whether the letter will affect museums' decisions, and some scientists even say it shouldn't. Chris Norris, a scientist at Yale University and museum blogger, says museums could also be seen as violating the public trust by removing board members and denying donations because of politics.

"If (museums) shift our position from education to outright advocacy, then we risk damaging that trust. ... Museums are not responsible for campaigning to protect the natural world; they are responsible for generating and supporting the science that underpins those efforts," Norris wrote. (Video via Yale University)

A Smithsonian spokesman said the museum has no plans to remove Koch from its board of directors. However, the group that organized this most recent campaign plans to present petitions to the museums Koch is part of during spring board meetings.