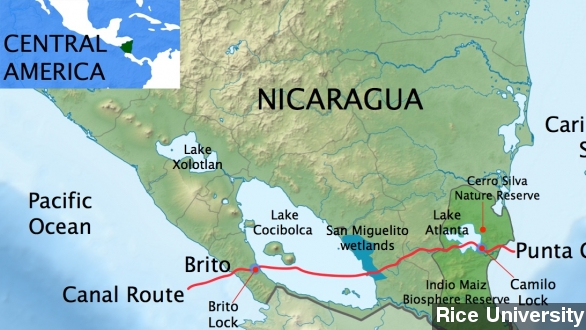 The planned Nicaragua Canal is something of an enigma.

The canal would cut across the Central American country, connecting the Caribbean Sea to the Pacific by way of Lake Nicaragua. (Video via CNN)

The company in charge of building the canal — HKND group — says the whole thing will be finished in five years at a cost of between $40 billion and $50 billion. (Video via La Prensa)

But it's not clear where that money's going to come from, or how HKND is going to complete the biggest earthmoving project in the world in just five years, when it hasn't even started digging yet.

Next to nothing is known about its billionaire CEO Wang Jing, who made his money in telecommunications, and says he will contribute millions to the project. (Video via HispanTV)

And it's unclear why it's being built now. HKND says shipping demand will justify the costs:

HKND Canal Advisor Bill Wild told CCTV: "Ship owners are moving to bigger ships. There's no issue about that, so we see that as a major element of our business line."

But an in-depth CNBC report last month stated, "A large number of experts who spoke to CNBC have more questions than answers about the project, but they all agree on one thing: There's not enough demand to justify a second canal so close to the Panama Canal."

On top of that, the Panama Canal is already expanding to accommodate bigger ships. That project is slated to be finished next year, and while it won't be able to fit the biggest container ships in the world, it's not clear whether it will even need to. (Video via Panama Canal)

Maersk, the company that makes the biggest container ships in the world, says it doesn't have the demand for the new canal. (Video via Maersk)

Even less is known about how the project will be carried out without having a disastrous effect on the communities and ecosystems the canal is projected to displace.

That's at least in part due to the fact that the government still hasn't released an environmental impact report. A law passed two years ago exempted the project — the biggest the country has ever seen — of requiring one. (Video via TeleSur)

A new report from a group of international scientists found a wide variety of environmental impacts that could prove disastrous for the people in the canal's path.

The report says the canal's construction would risk contaminating Lake Nicaragua, the largest freshwater reservoir in Central America, by potentially turning up sediment on the lake floor, which would reduce the lake's oxygen and potentially kill fish. (Video via Confidencial)

The displacement of communities has already sparked angry protests, with demonstrators accusing the president of selling out the country without regard for its people. (Video via Al Jazeera)

And some of those organizing the protests have been targeted. (Video via Deutsche Welle)

"A few days after this interview, Octavio Ortega was badly beaten and seriously injured. He doesn't know who did it," Deutsche Welle reported.

So far, the only work on the project has been surveying and building roads needed to transport construction equipment.