Scientists Offer Theory As To What Killed 30 Sperm Whales 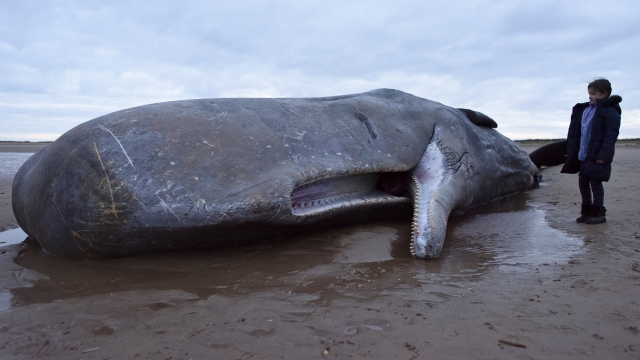 Scientists think they’ve found the reason behind the mysterious deaths of dozens of sperm whales in Europe.

Thirty sperm whales have washed up on beaches in England, Germany, France and the Netherlands over the past month and later died. (Video via The Guardian)

The sperm whales are believed to be from the same pod off the Norwegian coast that got a bit out of its depth. Scientists think the pod went too far south beyond the Dogger Bank where the water is too shallow, and it interfered with their navigation systems.

Dr. Peter Evans of the Sea Watch Foundation said, "They normally live out in very deep waters, about 3,000 metres deep — south of Dogger Bank it's mainly less than 50 metres — and can be less than 20."

As for why these sperm whales went so far, Evans believes the whales were hunting squid, based on the stomach contents of one of the cetaceans that wound up in the Netherlands. (Video via Richard Humphrey / CC BY 3.0)

Initial theories about the stranded whales guessed they were interfered with by boats or that their navigation was affected by man-made underwater objects. But Evans says there was no evidence to support that. (Video via Richard Humphrey / CC BY 3.0)

While it may seem alarming that so many whales are dying, scientists say the fact that so many of these marine animals traveled so far from home could actually be a sign the vulnerable sperm whale population is improving.