Scientists Really Want To Smash A Spacecraft Into An Asteroid 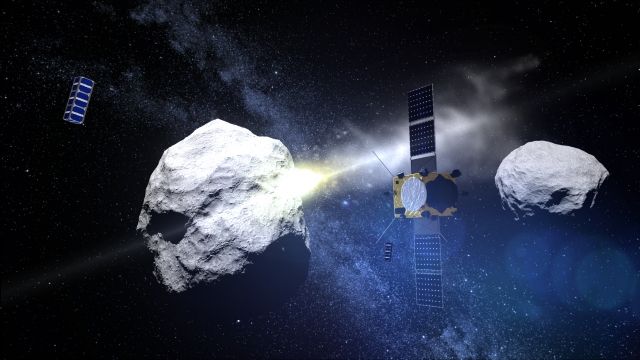 SMS
Scientists Really Want To Smash A Spacecraft Into An Asteroid
By Ethan Weston
By Ethan Weston
November 16, 2016
A group of scientists released a letter Monday supporting a planned space mission to divert an asteroid.
SHOW TRANSCRIPT

Scientists at the European Space Agency and NASA want to make sure we're prepared for a potentially Earth-threatening asteroid strike.

But what could we do to actually stop an asteroid headed straight for Earth?

Despite what Hollywood would have you believe, the answer isn't to nuke it to smithereens, a la "Armageddon."

Instead, NASA and the European agency basically want to shove the asteroid out of the way using a direct impact from a spacecraft.

"We are now, for the first time in our history, at a level of technological capability to maybe detect and do something about the threat from asteroids," former astronaut Chris Hadfield said.

A group of scientists published a letter Monday supporting a field test of an asteroid deflection system that aims to do just that.

It's called the Asteroid Impact and Deflection Assessment mission, or AIDA.

Scientists made it clear that the mission needs to launch in 2020 while its target — a binary asteroid system — will be close to Earth.

Close is pretty relative when it comes to asteroids. In this case, close is about 6.8 million miles away from Earth.

Scientists believe asteroid strikes like the one that killed the dinosaurs are incredibly rare — with tens of millions of years between them. But other potentially dangerous impacts happen more often.

SEE MORE: This Doomsday Asteroid Could Be Major Scientific Boon For NASA

The European Space Agency's council of ministers is meeting in December to decide whether to fund the 2020 mission.

Since most asteroids are leftovers from the early days of the solar system, AIDA has the potential to give insight into how solar system was formed — as well as acting as a potential safety net for humanity.