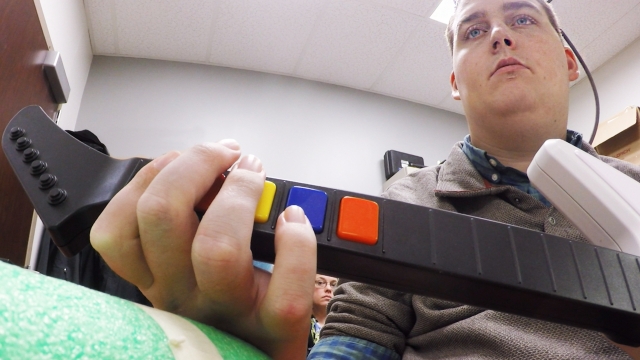 SMS
Scientists Help A Paralyzed Man Play 'Guitar Hero'
By Mikah Sargent
By Mikah Sargent
April 13, 2016
A Ohio man was paralyzed from the shoulders down after a diving accident, but scientists have since helped restore movement in his hands and wrists.
SHOW TRANSCRIPT

A man with quadriplegia — paralysis of the arms and legs — has been able to regain movement in his fingers, hands and wrists thanks to a first-of-its-kind medical breakthrough.

Ian Burkhart suffered a spinal cord injury in a diving accident in 2010, paralyzing him from the shoulders down. Researchers have been working with him for a few years now.

Doctors implanted an electrical device into Burkhart's motor cortex — the part of the brain responsible for voluntary movement — and connected it to muscle stimulators around his arms.

"Without the use of the system and the technology, Ian is not able to grasp objects. But once we connect the system and turn it on, Ian is actually able to open and close his hand. He is also able to pick up objects such as a bottle," said Chad Bouton, VP of Advanced Engineering and Technology at The Feinstein Institute for Medical Research.

Signals from Burkhart's brain aren't able to reach his muscles on their own, but this procedure effectively bypasses the spinal cord injury to help those signals get through.

Past medical advances helped humans control robotic limbs by imagining their movement, but it hasn't been possible for humans to use imagined movement to control their own anatomical limbs.

Burkhart said in 2014: "Picking up a cup of water and drinking it, or brushing your teeth or feeding yourself — you know, those things. If you can do those on your own, it makes a big difference in your life."

The implant and bypass have worked well enough that Burkhart is now able to play what looks like "Guitar Hero." But researchers say they have further improvements in mind.

"Maybe in a few years from now, we can have a wireless system that allows patients like Ian to be able to move his hand, and his arms and his functions — his arm, and legs and overall functions — much better without having cables to connect," said Ohio State University neurological surgeon Dr. Ali Rezai.

This video includes a clip from Johns Hopkins University.