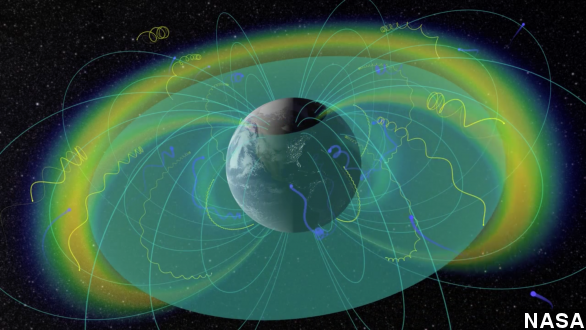 On this Thanksgiving, an invisible shield protecting the earth from dangerous super fast electrons might not be too high on your list of things to be thankful for, but maybe it should be. (Video via NASA)

Scientists found this barrier through NASA probes in the Van Allen radiation belts, which range from about 620 miles to 37,000 miles above the earth's surface. (Video via NASA)

Dr. Nicky Fox of Johns Hopkins University explains, "The radiation belts are two donut-shaped regions that encircle the earth. They're home to very intense radiation, both electrons and protons. And when these particles get very energized they can cause problems for satellites and astronauts."

The scientists who looked at the NASA probe's findings described a barrier that keeps the highest energy particles, electrons in particular, out in the further region of the belts. "The presence of such a clear, persistent and seemingly impenetrable barrier to inward transport of ultrarelativistic electrons at this very specific location presents a substantial puzzle."

So the scientists say their findings weaken previous theories — which held that the decline of high-energy or ultrarelativistic electrons was gradual, and caused by the earth's magnetic field. (Video via NASA)

Instead, researchers think the explanation is probably a little more gassy.

As the Los Angeles Times explains, "the researchers think it could have to do with electrically charged cold gas in a zone called the plasmasphere, which starts around 600 miles above the Earth and stretches thousands of miles into the outer, electron-dominated zone in the Van Allen belt."

If this all seems a little overwhelming to you, don't worry. You're not alone.

"Not sure what all of that means, but I'm glad it's there," said KWGN's Tom Green.

So if you plan on watching a little Thanksgiving football via satellite, now at least you know what to thank — an invisible barrier of electrically charged gas hovering some 600 miles above the earth's surface.