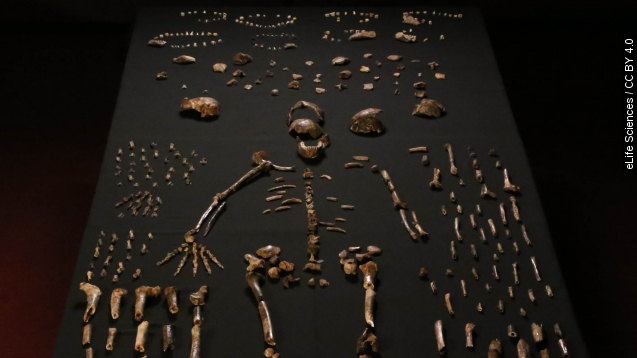 SMS
Scientists Find Bones Of New Human Relative Buried In A Cave
By Evan Thomas
By Evan Thomas
September 10, 2015
The discovery of Homo naledi is one of the most extensive finds ever recorded. The species displayed behaviors thought to be unique to modern humans.
SHOW TRANSCRIPT

Scientists have categorized a new species of human relative called Homo naledi, in one of the most extensive discoveries of its kind.

They found at least 15 individuals buried in a cave in the Cradle of Humankind in South Africa.

Homo naledi's skull is unique but bears some similarities to other human precursors. Its hands and feet display "humanlike" adaptations, but it has shoulders and hips closer to those of the Australopithecus species.

"Homo naledi is not human, but at times comes close. The original fossils are a strange mosaic of ancient and surprisingly modern. A brain no bigger than an orange, but feet almost identical to ours," a CNN anchor said. (Video via CNN)

And the location of the bones is perhaps as important as the bones themselves.

Professor Lee Berger tells CNN, "There is no damage from predators, there is no sign of a catastrophe. We had to come to the inevitable conclusion that Homo naledi, a nonhuman species of hominid, was deliberately disposing of its dead in that dark chamber."

Until this find, burial of the dead was thought to be a behavior limited to modern humans, first exhibited some 100,000 years ago. (Video via Discovery)

Berger and his team say seeing it here contributes to an anthropological significance on par with Tutankhamun’s tomb. (Video via BBC)

That said, the bones from the Homo naledi find haven't been dated yet, so scientists aren't sure exactly when these human precursors were buried.

This video includes images from eLife Sciences / CC BY 4.0.