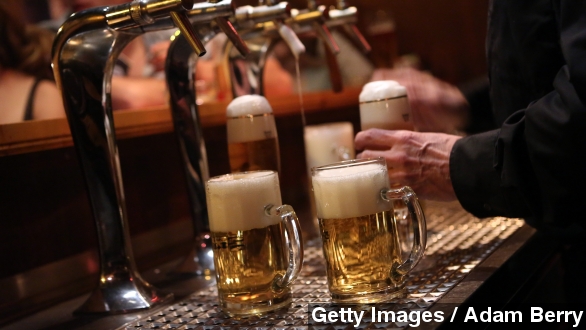 As scientists continue to search for clues to better understand how modern-day humans evolved from our hominid ancestors, apparently the bar could be a good place to look.

Scientists have determined that our current taste for alcohol could stem from a mutation some 10 million years ago, when the early hominids first started living on the ground, instead of in the trees. (Video via Bloomberg)

When those hominids came down from the trees, they found a whole lot of rotting fruit, which contains higher concentrations of ethanol, what we call alcohol, and the hominids with the mutation to better digest that fruit survived more successfully. (Video via PBS)

So in other words, as soon as our early early ancestors were learning to walk on solid ground, they might have also been learning how to get drunk enough to fall over.

But the study's lead author told LiveScience even though they could metabolize alcohol, they didn't necessarily have a taste for it. "If the ancestors of humans, chimps and gorillas had a choice between rotten and normal fruit, they would go for the normal fruit. Just because they were adapted to be able to ingest it doesn't mean ethanol was their first choice, nor that they were perfectly adapted to metabolize it."

For perspective, 10 million years ago was well before the recognizably human-looking hominids came along — upright, bipedal genuses like Australopithecus didn't come along for at least another 5 million years and Homo — our genus — only evolved some 2 million years ago. (Video via History Channel)

To pinpoint the mutation, the scientists charted a specific enzyme — ADH4 — that first comes into contact with ethanol, through various points over 70 million years, and looked at how ADH4 evolved.

Scientists say their research could help us better understand the medical complexities of how humans interact with alcohol today, specifically when it comes to alcoholism.