Scientists Discover Pluto's 'Little Sister' Makemake Has Its Own Moon 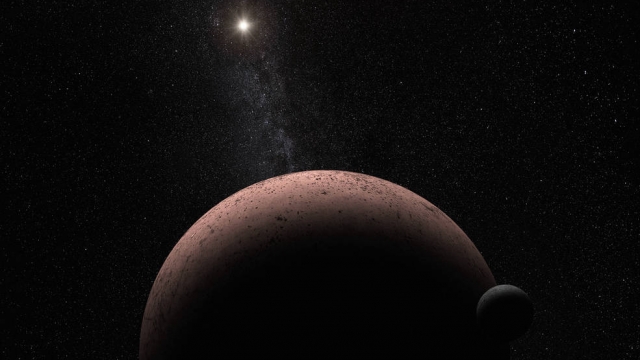 Pluto might not be a planet anymore, but at least it has some company at the edge of our solar system.

In 2005, astronomers found a slightly smaller dwarf planet called Makemake in the Kuiper Belt in the outer reaches of the sun’s light. On Tuesday, NASA announced Makemake has a moon of its own.

The moon is nicknamed MK 2, and astronomers first discovered it a year ago using the Hubble Telescope. It's about 100 miles in diameter and resides more than 4.2 billion miles away from the sun.

Scientists believe it orbits about 13,000 miles away from Makemake, much closer than the average distance of 238,000 miles between our moon and the Earth.

Finding the satellites and determining their mass can provide scientists with clues about how the celestial bodies were first formed.

Scientists hugely overestimated Pluto’s size for decades until the discovery of its moon Charon shed new light on the dwarf planet in 1978.

"The discovery of this moon has given us an opportunity to study Makemake in far greater detail than we ever would have been able to without the companion," researcher Alex Parker said.