Scientists 3-D Print A New Beak For This Mistreated Toucan 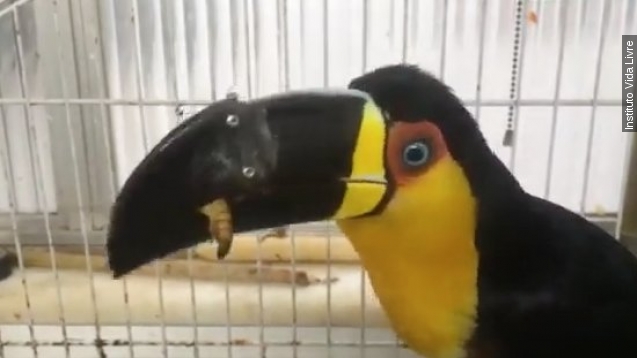 SMS
Scientists 3-D Print A New Beak For This Mistreated Toucan
By Ryan Biek
By Ryan Biek
August 25, 2015
Researchers from three Brazilian universities teamed up to design a prosthetic beak for a toucan that was likely abused.
SHOW TRANSCRIPT

In a great act of kindness and science, researchers at three Brazilian universities recreated the upper portion of a toucan's beak after hers was severely damaged. (Video via Instituto Vida Livre)

The toucan, named Tieta, was rescued from an illegal animal market. How she lost the top of her beak is unclear, but it was likely due to abuse by smugglers.

Without her beak, Tieta was mostly dependent on others to feed her.

But with her new plastic 3-D-printed beak, she can eat on her own. According to the BBC, the beak took three months to design.

The head researcher told CNN: "With the prosthesis, she won't be released into the wild because she will require monitoring. But, she will have a more autonomous life."

Tieta might now be used to educate people on the effects of the illegal animal trade.