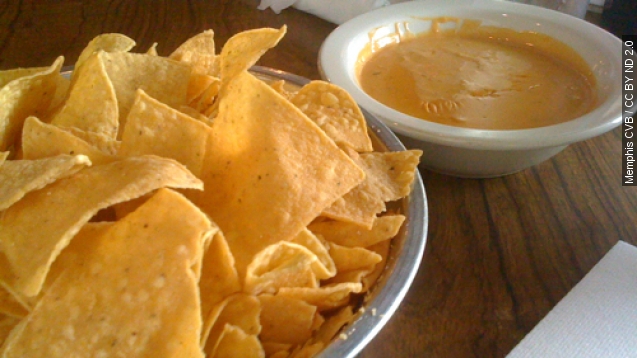 SMS
Science Shows Just How Unsanitary Double Dipping Is
By Ryan Biek
By Ryan Biek
December 1, 2015
Researchers found if you dip your food in sauce after you've taken a bite, that second dunk can put hundreds of times more bacteria in the bowl.
SHOW TRANSCRIPT

That first bite was good, but should you double dip for the next? Scientists now say it's more than just bad manners.

Researchers from Clemson University found that second, contaminated dip leads to hundreds of times more bacteria staying in the bowl than on the first dip in chocolate and cheese sauces.

But if there's one sauce you should definitely keep to a one-and-done rule, make it salsa.

Salsa was five times more susceptible to bacteria than chocolate or cheese sauces.

One reason for the difference was that chocolate and cheese sauces were thicker, so more of the contaminated sauce stuck to the cracker and left the bowl. Contrast that with the runnier salsa, where more bacteria sloshed back in.

In case we haven't already destroyed your appetite, the researchers noted past studies have shown the human mouth holds anywhere from 300 to over 1,000 different kinds of bacteria.

The lesson of the day: Be a good friend and eat it all in one bite.