Science Can Save Your Melting Ice Cream Cone 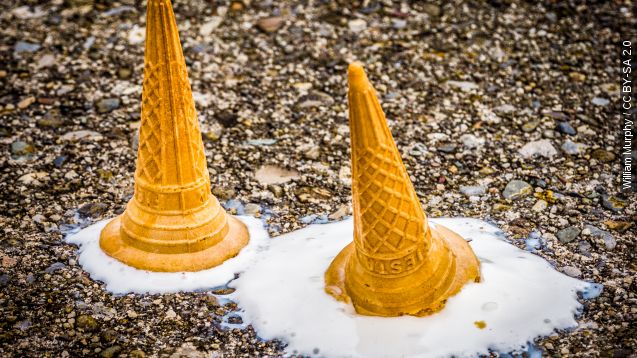 SMS
Science Can Save Your Melting Ice Cream Cone
By Katie Link
By Katie Link
August 31, 2015
Researchers in Scotland have found a way to make your ice cream melt slowly in the summer sun.
SHOW TRANSCRIPT

A scientific breakthrough is hoping to solve one of summer's biggest problems — melting ice cream. Scientists from the University of Dundee in Scotland have found a way to keep your ice cream from turning into soup.

The researchers developed a method to produce a protein that can be added to your ice cream. Here's how it works.

The protein binds together air, fat and water and makes the combination a lot stronger and resistant to heat. Oh, and the cherry on top? It could also mean fewer calories and saturated fat in your favorite scoop of mint chocolate chip.

Genius, right? The protein already occurs naturally in some foods, but this is a first for the summertime favorite. Or falltime, or wintertime. We don't judge. (Video via Gemma Stafford)

One of the researchers said: "It has been fun working on the applied use of a protein that was initially identified due to its practical purpose in bacteria."

And the good news isn't just for ice cream-eaters. Manufacturers may have an easier time storing and delivering products because it stays frozen for longer. (Video via York Daily Record/Sunday News)

Researchers say the slow-melting product could hit stores within three to five years.