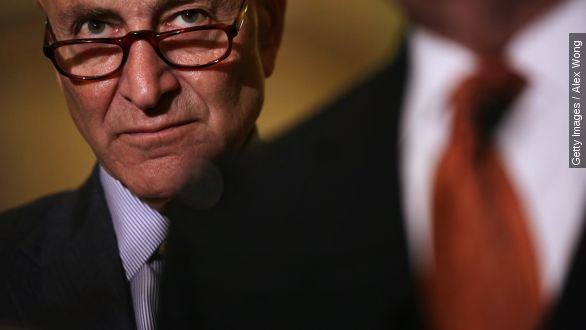 This week, Sen. Harry Reid from Nevada made a surprise announcement:

"I'm not going to run for re-election," Reid said.

And, by the time everyone caught their breath, Reid's successor had emerged.

"I feel very comfortable with the continuity of leadership that's going to occur with Schumer," Reid said. "He will be elected to replace me in 22 months. I think one reason that'll happen is because I want him to be."

In just a few hours, Reid announced his retirement and tapped Sen. Chuck Schumer as his replacement. Done.

But behind closed doors, NPR points out this plan could've been in the works for a while: "Leadership elections in the Senate ... really take place over years of interaction and commerce among the members of that caucus. The outcome is usually the product of countless political transactions between individual senators."

Still, Schumer's "24-hour campaign," as Politico put it, happened in the blink of an eye and with little immediate opposition. Senate Minority Whip Dick Durbin, who is Reid's current No. 2 and who currently outranks Schumer, has even put his support behind Reid's pick. (Video via U.S. Senate)

Democrats are looking to take back the Senate, and Schumer played a part in doing just that in 2006. He has allies within the Democratic caucus in the Senate and is very well-spoken.

"They say the most dangerous place in Washington is between Chuck Schumer and a camera," Washington Post reporter Aaron Blake told Fox News.

But as much as Schumer could be a shoo-in, he still faces a few challenges before the deal is done. For one, Sen. Patty Murray from Washington hasn't shown her hand. Murray is the only other name being shopped around for Reid's spot, and unlike Sen. Elizabeth Warren and Durbin, she hasn't said she won't be vying for minority leader. (Video via The Fiscal Summit, Fortune Magazine)

But some believe Schumer's ties to Wall Street could be harmful. The financial services industry is big in New York, his home state, and some on the left have expressed that Schumer is too close for comfort.

Finally, there's still a lot of time between now and when Harry Reid will step down — in January of 2017. If Reid can go from third-ranking Democrat in the Senate to No. 1 pick as minority leader overnight, who knows what could happen in the next 22 months.