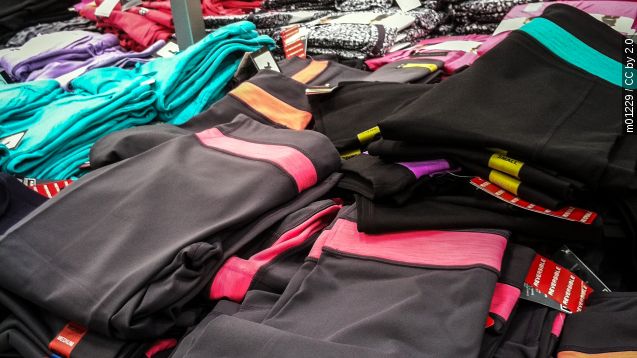 Yoga pants are worn by women around the U.S. — who probably don't do yoga. But hey, they're comfy.

Well, how do yoga pants and a high school go together? Cape Cod Regional Technical High School has a dress code that doesn't allow girls to wear yoga pants by themselves.

The school's dress code states: "Leggings, tights, yoga pants and any other extremely form-fitting apparel are considered an accessory and must be worn with dress/skirt or shorts."

Massachusetts high schooler Emily Connolly told ABC she doesn't think the dress code has anything to do with learning how to dress to be successful in the workplace, like the principal said.

"My friend and I didn't agree with it at all," Connolly told ABC.

So the 16-year-old put together a protest on Facebook and invited fellow students to wear yoga pants, we're guessing without the skirts or shorts on top, the first day of classes.

"Like 200 girls are wearing yoga pants the first day. It's like a strike thing," said one student.

"Do yoga pants distract you?" asked a reporter for WFXT.

"No, not really, it's just clothes," said another student.

The principal says he's just trying to prepare the students at the technical school for the workforce, where they likely wouldn't be allowed to wear yoga pants anyway.

This isn't the first dress code story we've seen, and it won't be the last. Welcome to the war on yoga pants.