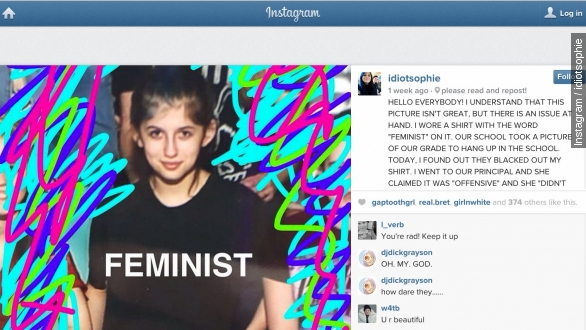 SMS
School Removes 'Feminist' From Student's Shirt In Photo
By Matt Moreno
By Matt Moreno
April 21, 2015
Ohio middle school student Sophie Thomas says she didn't discover that her t-shirt had been Photoshopped until she saw the final picture.
SHOW TRANSCRIPT

The word "feminist" isn't a dirty word to most, but it's at least controversial enough for a school principal in Ohio to blur it out on a student's class photo.

"I saw that they had removed the word from my shirt, and I was insanely upset," Thomas told WXIX.

Thomas wore a shirt with the word "feminist" on it to picture day, but — as she says in this Instagram post — she didn't figure out the photographer altered it until seeing the final class picture.

According to Thomas, the school's principal, Kendra Young, told her "some people might find it offensive," and the school's superintendent said other things were removed from the photo, including an offensive hand gesture.

While a writer for Women's Agenda takes offense to the school's actions, she writes, "At least it is encouraging to know that young women like Sophie Thomas are doing what they can to combat this anachronistic stigma. Bravo, Sophie!"

"Feminism is a state of mind. It's a state of being who you are and not being treated as less," say women for the Feminist Majority Foundation.

Despite positive-sounding campaigns like this, feminism has caused a stir in the past.

Time editors apologized after including the word in the magazine's "Which Word Should Be Banned in 2015?" poll. An editor's note on the page apologizes and now reads, "While we meant to invite debate about some ways the word was used this year, that nuance was lost."

In 2013, Mic actually called feminism "One of the Most Controversial Labels Today."

After a meeting between Thomas, her mother and school officials, WXIX reports those involved will now start a larger conversation about the issue.

This video includes an image from Mike Atherton / CC BY NC SA 2.0.