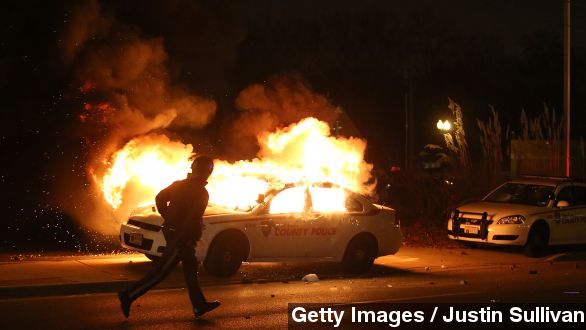 The grand jury’s announcement that Officer Darren Wilson would not be indicted for the killing of unarmed teen Michael Brown set off new protests in Ferguson, Missouri, Monday night, as violence erupted across the city. (Video via KSHB)

Police say at least 12 buildings were set on fire in various parts of St. Louis, some of which were completely destroyed. Officers arrested 29 people, and widespread looting was reported throughout the area. (Video via KMOV)

Overnight, the St. Louis Post-Dispatch reported area hospitals treated at least 13 people for injuries related to the protests, along with two people shot.

Police say an officer in nearby University City was shot in the arm but did not confirm if it related to the protests.

Multiple vehicles were also set ablaze and the Ferguson police department reported “heavy automatic gunfire.” During an overnight press conference, police indicated the consistent gunfire kept them from leaving officers at some road blockades and delayed firefighters’ responses to the blazes set during the chaos. (Video via KSHB)

KSHB's feed shows, while some officers carry what looked like non-lethal weapons, armored cars were again part of the police presence, just as they were in August.

"We need to realize this is not just an issue for Ferguson, this is an issue for America," President Obama said from The White House.

Shortly after 10 p.m. eastern time, President Obama addressed the nation, calling for calm on all sides.

But it was the juxtaposition in split screens like this on CNN, during Obama's address, that caught more attention that his remarks.

Just after the no indictment decision came down, the family of Michael Brown asked for peace in St. Louis and said, “We are profoundly disappointed that the killer of our child will not face the consequence of his actions."

Unlike during August's protests, media helicopters were allowed overhead Monday, and they captured the spread of police-disbursed tear gas after protesters tried overturning a police car.

The grand jury’s decision also sparked demonstrations nationwide, with hundreds gathering outside the White House in Washington D.C, marching along New York City streets and in several other major cities throughout the country.