'Scandal:' How Far Will Everyone Go To Save Olivia Pope? 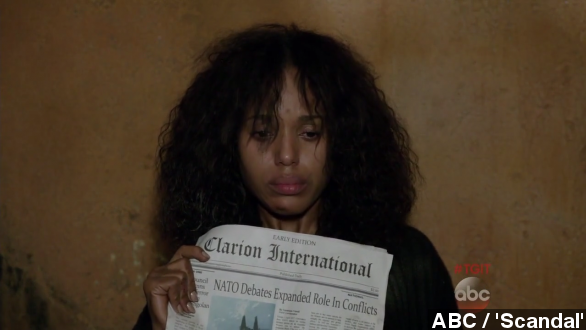 On Thursday’s episode of "Scandal," we got a sense of just how far everyone would go to save THE Olivia Pope. Including Mellie?

"I took care of everything," said Mellie Grant on ABC's "Scandal."

Yep, Millie set aside her beef with Olivia and took matters into her own hands.

She ended up giving Olivia Pope and Associates a key piece to the puzzle to find where Olivia was being held captive.

Cue Huck going back to his old torturing habits to get information about Olivia's whereabouts.

And fans on Twitter were freaking out. So much so that Huck was trending even after the episode was over. As one fan declared, "Once again Huck proves to be the most useful man in Liv's life."

Well yes. But who can forget Fitz, the president who negotiates with terrorists and declares war on Angola all to save his one true love, THE Olivia Pope? Because if you...

In the end, no matter what anyone does to save Olivia Pope, Shonda Rhimes always has the last laugh. Because Olivia Pope will always save herself.

Or put herself on the open market hoping someone she knows will buy her.

"You're saying I should sell you?" asked Martin.

Can we get that on a bumper sticker?