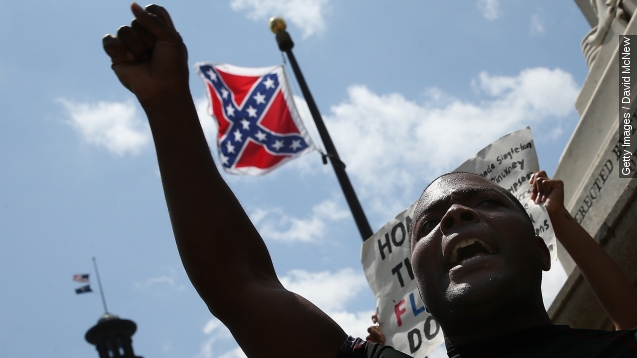 SMS
SC Statehouse Confederate Flag Gets 1 Vote Closer To Removal
By Ben Lawson
By Ben Lawson
July 6, 2015
After a 37-3 vote Monday, it seems likely the bill that would remove the Confederate flag from the South Carolina Capitol will pass the Senate.
SHOW TRANSCRIPT

The proposal to have the Confederate Flag removed from the grounds of the South Carolina state capitol still has one more reading to go in the state Senate, but the results of a vote Monday look pretty conclusive.

The effort to have the flag removed once seemed like a long shot but with an overwhelming 37-3 vote, the proposal seems likely to make it to the South Carolina House of Representatives.

The debate over removing the Confederate battle flag resurfaced after a racially motivated shooting in a Charleston church killed nine people.

Supporters of the flag argue it symbolizes Southern pride, but opponents have long called it an emblem of slavery and racism.

There were several attempts to amend the bill before Monday's vote. Republican Lee Bright, one of the flag's loudest supporters, proposed allowing the people of South Carolina to vote on the issue. Republican Danny Verdin called for the flag to be flown only on Confederate Memorial Day. (Video via NBC)

Neither of those amendments gained traction. The bill will get a third reading Tuesday, and if it passes, it will move on to the Republican-controlled South Carolina House of Representatives.