Say Hi To Casper, Potentially The Newest Species Of Octopod 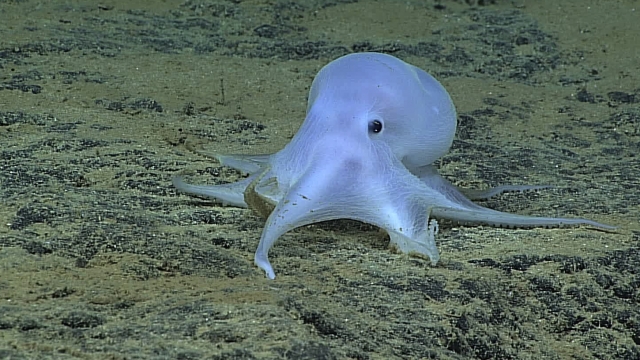 Say hello to what could be a brand-new species of octopod.

A probe from the National Oceanic and Atmospheric Administration spotted this little guy over 14,000 feet below sea level off the coast of Hawaii.

As you can see, this isn't your typical octopod. An NOAA scientist points out how the creature's lack of muscle and ghostly white color means it could be an undiscovered species.

Folks on the Internet are already naming the octopod Casper because, well, you can probably see the resemblance.

But it's more than just the octopod's appearance that makes it extraordinary.

Unlike other octopods found deep underwater, this one lacks fins on the side of its body, and its suckers resemble a common octopus usually found in much shallower waters.

Researchers say this is the deepest that sort of octopod has ever been discovered.

This video includes clips from the NOAA Office of Ocean Exploration and Research and images from ma photo / CC BY SA 3.0.