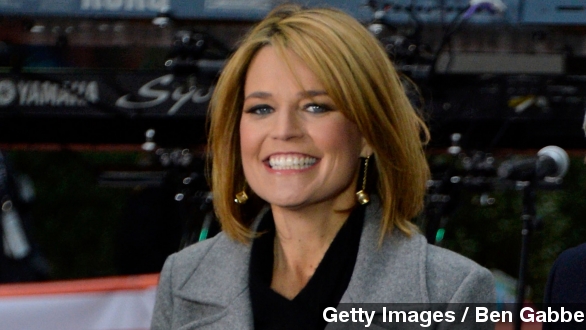 NBC is subbing out its Nightly News anchor again, this time for one of its morning anchors.

Savannah Guthrie, co-anchor of NBC's "Today" show, will be filling in for Lester Holt, who was filling in for Brian Williams on "NBC Nightly News." It's the sub of a sub.

And that means much longer days for Guthrie, because she doesn't plan on missing "Today" after her nighttime anchoring escapade.

Holt is reportedly dealing with a family emergency.

OK, so an anchor is filling in for another anchor. Big whoop, right?

Deadline says this is significant because a big rumor was that Guthrie would replace Williams on his NBC show, allowing the network to move Hoda Kotb into Guthrie's morning "Today" slot in an attempt to "jump-start that show's ratings." Much like Holt has for the evening show.

"With Lester Holt at the healm, last week NBC's 'Nightly News' ratings have risen 7 percent and was No. 1 in the ... 18-49 demographic," The Insider reporter said.

This isn't Guthrie's first time working the double shift. She has filled in for Williams in the past when he was on vacation.

And we know Guthrie won't be a permanent "Nightly News" host, as she just re-signed her contract with "Today."

This took effect last month. Williams said he'd been in a helicopter that made an emergency landing after it came under enemy fire during the Iraq War in 2003.