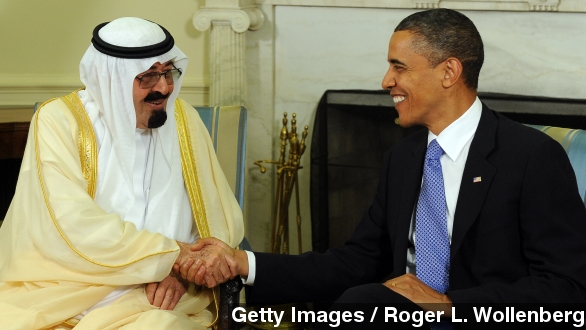 SMS
Saudi Blogger's Punishments Could Present Problem For U.S.
By Christian Bryant
By Christian Bryant
January 17, 2015
More U.S. voices are condemning Raif Badawi's punishment, but that could complicate the relationship between Saudi Arabia and the U.S.
SHOW TRANSCRIPT

Calls from U.S. officials are growing louder for the release of Saudi blogger Raif Badawi, who is serving a 10-year sentence in jail along with 1,000 public lashes for reportedly insulting Islam.

Most recently, a group of U.S. senators — six Democrats and two Republicans — sent a letter to Saudi Arabia's ruler King Abdullah, condemning the punishment and calling for Badawi's release.

The public flogging of Badawi presents a complicated issue for the United States, which already has a tense relationship with Saudi Arabia.

Saudi Arabia's government operates under sharia law, carrying out severe punishments like amputating a person's hands or feet if they've been convicted of stealing.

The executive director of Human Rights Watch also points out Saudi Arabia has jailed many — like Badawi — who have questioned religious authority, and the country continues to conduct public beheadings. "Saudi Arabia beheaded at least 26 people last August alone. The 82 executions in 2014 make Saudi Arabia a world leader in capital punishment."

A friend of Badawi's wrote on CNN that many Saudis adhere to a strict strain of Islam. The country is also a haven for Islamic extremism. He adds, "Osama bin Laden was a Saudi citizen, as were 15 of the 19 hijackers on 9/11."

But Saudi Arabia is also an invaluable regional ally in the fight against terrorism; the country is participating in the U.S.-led airstrike campaign against ISIS, and it's training moderate Syrian rebels on its soil. (Video via U.S. Central Command)

Saudi officials were also present at the unity march in Paris following the attacks on a Satirical newspaper and a Kosher market by Islamic extremists. Despite Saudi Arabia's problematic government, a national security analyst explains why U.S. could be reluctant to cut ties with the country. (Video via BBC)

"The country in large part gets a pass not only because it alone can control the price of oil but it is America's best friend in a tough neighborhood," a correspondent noted.