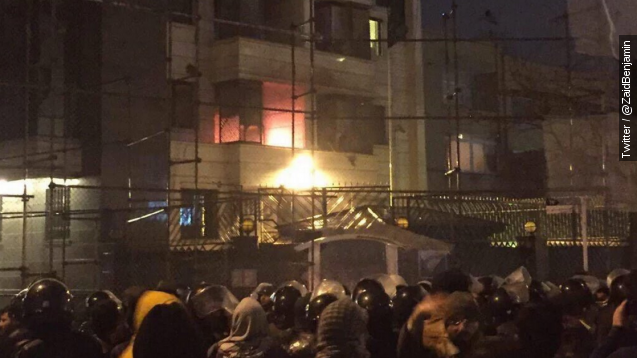 Saudi Arabia is ending its diplomatic relationship with Iran after protesters stormed the Saudi embassy in Tehran and set fire to part of the building. (Video via Twitter / @ZaidBenjamin)

The Iranians were agitated by Saudi Arabia's execution of 47 prisoners on terrorism charges, including Shiite cleric Nimr al-Nimr.

The predominantly Sunni Saudi Arabia accused Nimr of inciting violence among the nation's Shiite minority, while human rights groups, like Amnesty International, claimed the cleric was a peaceful dissident. (Video via Press TV)

While the demonstrations in Tehran were the biggest, many Shiite Muslims in countries like Bahrain, Lebanon and Afghanistan took to the streets to voice their displeasure with the executions.

Iranian president Hassan Rouhani said, "The Saudi government has damaged its image, more than before, among the countries in the world, in particular [among] Islamic countries, by this unIslamic act." (Video via Press TV)

U.N. secretary general Ban Ki-moon expressed concerns over the fairness of Nimr's trial, and even Saudi Arabia's allies at the U.S. State Department said the executions could stoke tensions "at a time when they urgently need to be reduced."

Despite condemning the executions, Rouhani also decried the attacks on the embassy, calling for the arrests of those responsible.

Saudi Arabia's foreign minister said its staff has been removed from Iran. He also said Iranian diplomats were asked to evacuate the kingdom within 48 hours.