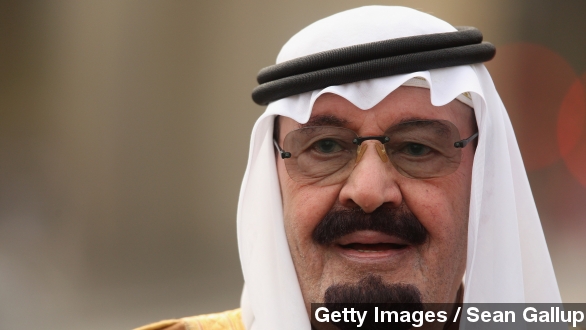 King Abdullah of Saudi Arabia has passed away at the age of 90.

Saudi Arabia's state-run TV announced the news early Friday. The monarch was hospitalized with a lung infection several weeks ago, and had been battling poor health for years

Abdullah assumed the throne in 2005, but had been the kingdom's de facto leader since a stroke incapacitated the previous king in 1995. Under his guidance, Saudi Arabia took a more active role in regional disputes, countering Iran's presence in countries like Lebanon, Syria and Yemen.

Abdullah also fostered the alliance between the U.S. and Saudi Arabia, though he broke with the U.S. over issues like the 2003 invasion of Iraq and the Arab Spring uprisings in 2011.

Domestically, Abdullah was known as a modest reformer who worked to modernize his country's economy and advance some civil liberties — though he didn't challenge the religious authority of the country's conservative clerics or permit any liberalization of the country's monarchy.

In a statement, President Obama praised King Abdullah for creating the Arab Peace Initiative, an attempt to normalize relations between Israel and neighboring Arab nations. Obama said, "As a leader, he was always candid and had the courage of his convictions."

With Abdullah's death, the crown will now pass to Abdullah's brother Salman.

The Washington Post notes that succession after Salman, who is 79 years old and reportedly in poor health, is up in the air. Abdullah's choice for deputy heir is seen as controversial by some in the royal family and could prompt a power struggle.