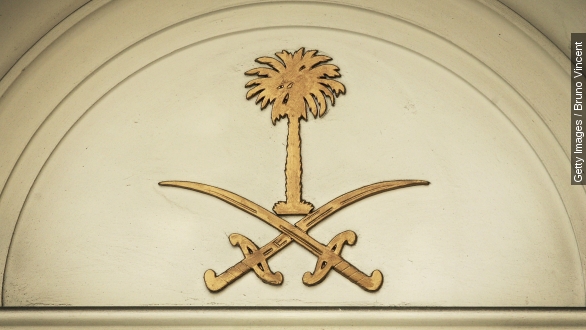 SMS
Saudi Airstrikes In Yemen Might Complicate Political Crisis
By Jake Godin
By Jake Godin
March 26, 2015
Saudi Arabia has begun an airstrike campaign in Yemen with its Arab allies in an attempt to dislodge Houthi rebels. But will it help?
SHOW TRANSCRIPT

Saudi Arabia, the United Arab Emirates, Bahrain, Qatar and Kuwait released a joint statement saying the operation is in response to a call for aid by Yemen's U.S.-backed President Abed Rabbo Mansour Hadi, who was forced out of the country's capital by the Houthis in February. (Video via Al Arabiya)

Jordan, Egypt, Morocco and Pakistan have also pledged support to the coalition with the Saudi-owned Al Arabiya reporting they're taking part with varying amounts of military support. (Video via Jordanian Armed Forces)

The introduction of a Saudi-led operation makes Yemen's political situation even more complicated than it already was, and not everyone is on board with the idea of foreign military intervention.

While Western nations support the coalition with the U.S. even offering logistical support, Iran, which is believed to be backing the Houthi rebels as a part of a proxy war, condemned it as an act of aggression. (Video via RT)

Federica Mogherini, vice president of the European Commission and high representative of the EU's foreign affairs, released a statement calling for a diplomatic solution over military action.

As for the Yemenis, they're split. Speaking to the Middle East Eye, one Yemeni analyst based in Sanaa says while Yemenis in the capital are angry over the airstrikes, those in the Houthi-contested city of Taiz cheered. (Video via YouTube / محمد أبو سالم)