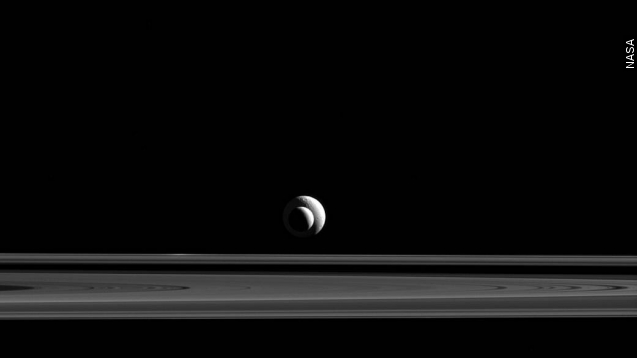 SMS
Saturn's Moons Align To Form Bullseye In Orbit
By Ryan Biek
By Ryan Biek
December 16, 2015
NASA has just released an image of Tethys and Enceladus taken at the perfect moment.
SHOW TRANSCRIPT

For a perfect moment in time, two of Saturn's moons aligned into a bullseye.

The image was taken by the Cassini orbiter in September, but it was just released by NASA. (Video via NASA)

The smaller of the moons seen is Enceladus, which has an icy landscape. (Video via NASA)

Below its surface lies a global ocean, the source of water for "geyser-like spouts" on the surface. (Video via NASA)

The other moon in the image, Tethys, is roughly twice as large as Enceladus.

Saturn has over 60 moons in all. With all that competition, you can see why two of them would want to stand out.