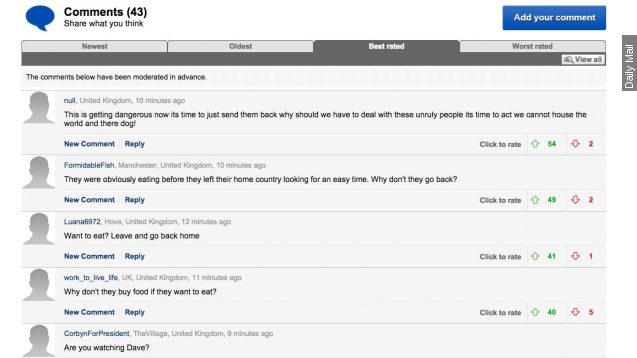 SMS
Satirists Use Hitler Quotes To Expose Daily Mail Commenters
By Matt Moreno
By Matt Moreno
August 11, 2015
In case you needed more proof the comments section is a horrible corner of the Internet, these Hitler quotes got a lot of up votes.
SHOW TRANSCRIPT

Internet comment sections are always a scary place to venture into, but a few satirists recently decided to try an experiment on the Daily Mail's comment section.

The people behind the @bestofthemail and @dmreporter Twitter accounts commented on multiple Daily Mail articles, using actual Adolf Hitler quotes and Nazi propaganda and replacing the word "Jew" with "migrant."

And other Daily Mail commenters loved it. The two's comments were upvoted a lot — 480 up votes vs. 16 down votes.

In a quote derived from German Labor Front leader Robert Ley, again only replacing the words "Jew" and "Judah," the satirical commenters posted, "In this struggle against migrants, there’s only a clear either/or. Any half measure leads to one’s own destruction. There is no other choice than to fight a pitiless battle against the migrants in every form."

That comment received 193 up votes and just six down votes.

The two detailed their experiment on Medium, saying they did it to show how "ghastly" some of the coverage and comments about migrants in Europe has become.

Migrants and refugees fleeing to Europe has been a growing issue. Many are traveling from northern Africa and the Middle East hoping to find better lives and escape violence in their home countries. (Video BBC)

According to the United Nations High Commissioner for Refugees, migrants have more than doubled in Europe this year compared to last, creating a tense situation. (Video via PBS)

The satirical commenters says only a few of their comments were blocked by administrators. The two have since been banned from posting by Daily Mail administrators.

This video includes images from Drdoht and PouX / CC BY SA 3.0 and music from Birocratic / CC BY ND 3.0.