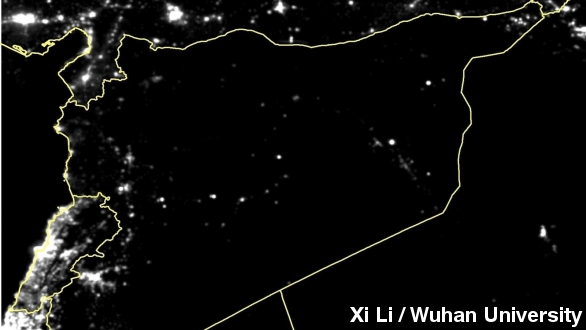 By Sebastian Martinez
March 12, 2015
Satellite images of Syria show a steady decline in the amount of light at night from 2011 to now.
SHOW TRANSCRIPT

The conflict in Syria has cost more than 200,000 people their lives, displaced millions, and now research shows it's left the country in the dark.

The research, from Wuhan University in China and the University of Maryland, shows steady decline in light starting in 2011, when the conflict began.

In all, the country has lost 83 percent of its light at night in the last four years, according to analysis of satellite images from the National Geophysical Data Center.

And some areas that have seen heavy fighting, like Aleppo, have lost even more. The province has lost 97 percent of its visible light at night. (Video via The Wall Street Journal, YouTube / Hadath MC)

Although the research says the loss of light is because of the war, it's not clear how much of that is due to destruction of infrastructure or displacement of people, among other factors.

Aid groups, like the #withsyria coalition, are using the data to draw attention to the ongoing conflict, circulating a petition calling on world leaders to intervene. (Video via With Syria)

The coalition has enlisted figures like former Secretary of State Madeleine Albright, who said during a press briefing Wednesday, “I believe it is the single most important issue in the Middle East today, yet it sometimes feels as though the world has forgotten about it.” (Video via Dartmouth College)

The U.N. security council has been criticized for failing to implement its resolutions on the Syrian conflict, and on Thursday a U.N. official told the BBC, "powerful nations had put their own interests ahead of the need to end the war." (Video via The White House)