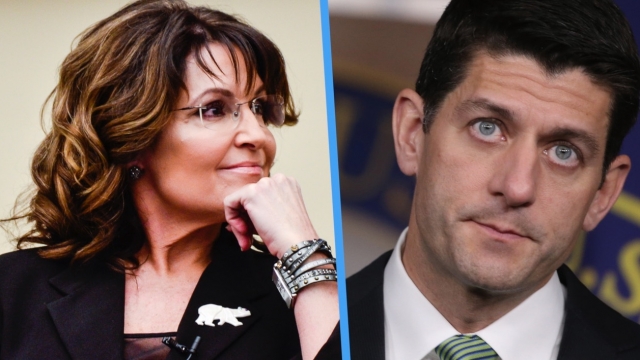 SMS
Sarah Palin Says Paul Ryan's Failure To Endorse Donald Trump Is Unwise
By Matt Moreno
By Matt Moreno
May 8, 2016
Sarah Palin says Speaker of the House Paul Ryan has "disrespected the American people" by not yet putting his support behind Trump.
SHOW TRANSCRIPT

No endorsement for Donald Trump and no love from the former governor of Alaska.

Sarah Palin says Speaker of the House Paul Ryan has "disrespected the American people" by not putting his support behind the presumptive Republican presidential nomineee.

"As the leader of the GOP, the convention, certainly he is to remain neutral, and for him to have already come out and say who he will not support was not a wise decision of his," Palin told CNN.

While Ryan has yet to back Trump, he hasn't ruled it out completely. He told CNN, "I'm just not ready to do that at this point."

"Most everybody has endorsed me other than Paul Ryan. I don't know what went wrong there," Trump said at a recent rally.

Trump's been vocal about the lack of support from Ryan, even posting a series of tweets about it on his Twitter account.

That doesn't mean Republicans have been circling the wagons in support of the businessman-turned-politician, though.

And now that Trump is the only Republican left standing in the race for the White House, many are wondering who will be his pick for vice president.

On that front, Palin — who's actively supported and campaigned for Trump — suggested to CNN she'd likely do more to hurt Trump's chances than help him if selected. She said, "I just want the guy to win."