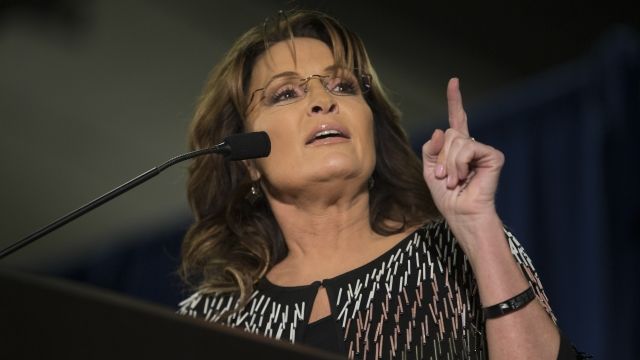 What the Internet truly cares about ... is that fly jacket she was wearing. It sold out after she wore it when she announced her endorsement.

The Milly Beaded Bolero Jacket is awfully pretty — and shiny.

Palin's wardrobe has been in headlines before, especially during her run for VP with John McCain. This is from 2008.

This latest jacket hasn't received the nod of approval from critics. New York Daily News said it was "on the fringe" and would have been great on "the set of 'The Electric Horseman,' but not in the heat of a campaign." Mashable called it "weird."

Twitter, of course, had a field day. Disco ball hedgehog, anyone?

But it wasn't all bad press. People magazine said: "Sarah Palin has always been, and will always be a beacon of elegance in the midst of a bleak Alaskan tundra."

Well, we think that's a compliment.

The Washington Post just called it "sparkly" and didn't mention it again in the article.

Wait. Didn't mention it again? You mean her jacket wasn't the point of all this?