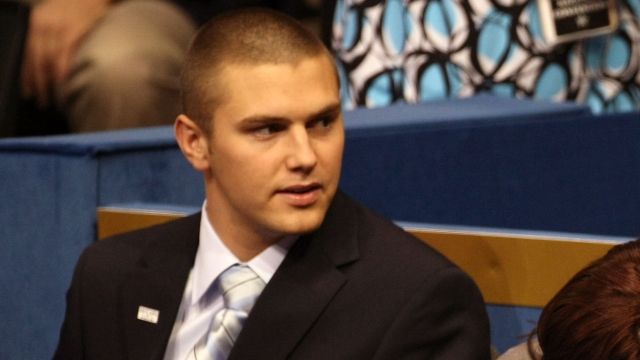 Sarah Palin has returned to the forefront of the political world with her endorsement of Donald Trump for president, but her family is also grabbing a few headlines.

The day before Palin announced her endorsement, her son Track was arrested in Alaska on several charges including assault and interfering with a report of domestic violence.

Track Palin reportedly punched and kicked his girlfriend after an argument, then threatened to shoot himself. Police said his blood alcohol content at the time was more than twice the legal limit.

This isn’t his first run-in with the law. In 2014, Track Palin and his sister Bristol were reportedly involved in a brawl at a house party in Anchorage, though no charges were filed.

Sarah Palin, while speaking at a Trump campaign event in Tulsa, Oklahoma, blamed his actions on post-traumatic stress disorder stemming from his military service in 2008 and accused President Obama of not empathizing with returning combat veterans. (Video via Sarah Pac)

Veterans have criticized the former Alaskan governor for using PTSD politically and cautioned her against blaming anyone for the condition.

The founder of the Iraq and Afghanistan Veterans of America, Paul Rieckhoff, said PTSD "is a complicated mental health injury and I would be extremely reluctant to blame any one person in particular." (Video via Comedy Central)

He also told NBC he hopes the issue "doesn't become a portable chew toy in a political campaign." Track Palin was released on $1,500 bail. He’s due back in court on Feb. 19.