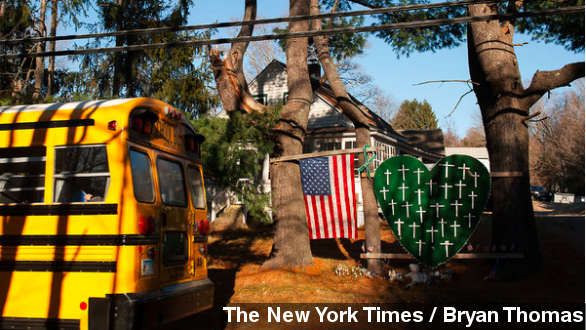 SMS
Sandy Hook Shooting Anniversary: What's Changed?
By John O'Connor
By John O'Connor
December 14, 2013
As the nation reflects on one of its most deadly mass shootings a year later, what has been done to curb the violence?
SHOW TRANSCRIPT

Saturday marks the one-year anniversary of the horrific shooting at Sandy Hook Elementary in Newtown, Conn., that claimed the lives of 20 first-graders and six educators. (Via CNN)

The shooting sparked a major national debate over stricter gun control and the state of mental health care in the U.S. (Via Fox News)

But as the nation reflects on what was one of the deadliest mass shootings in its history, the question is, what's been done to curb the violence?

The anniversary of Sandy Hook comes just a day after a school shooting at Arapahoe High School, which is located in the greater Denver area only a few miles away from Columbine High School — the site of another one of the nation's most infamous school shootings. (Via KCNC, The Guardian)

Los Angeles Times reports that according to Mayors Against Illegal Guns, Friday's shooting at Arapahoe High School was the 28th such shooting at a school since Sandy Hook last year.

Following the shooting at Sandy Hook, President Obama promised meaningful gun control reform — a promise that, so far, the federal government has failed to deliver.

Not only has Congress not passed a single law to strengthen gun regulation, but President Obama was unable to convince Congress to pass a widely supported bill that would have expanded background checks for gun purchases. (Via CBS)

And so some states have taken the issue of gun control into their own hands.

Slate reports that "20 states were able to ban some types of guns, limit magazine capacities, expand background checks, or otherwise restrict gun ownership. ... Even some conservative states passed new gun control laws, mostly to strengthen coordination with a federal database of people ineligible to own guns."

But as evident by Friday's shooting at Arapahoe High School, even states like Colorado, which enacted major gun reform legislation over the past year, haven't solved all the problems.

Sandy Hook brought to light the issue of mental health and how making improvements to the mental health system may be a solution to preventing more mass shootings.

According to USA Today, some progress has been made in the past year regarding mental health issues.

"In the year since the Sandy Hook Elementary School shootings, [36] states [and the District of Columbia] have increased funding for mental health. States had cut $4.35 billion from mental health services from fiscal year 2009 to 2012."

The families of victims in the Newtown shooting have chosen not to hold a public service to commemorate the one-year anniversary of the shooting. They have also requested that the media do not report from Newtown Saturday.