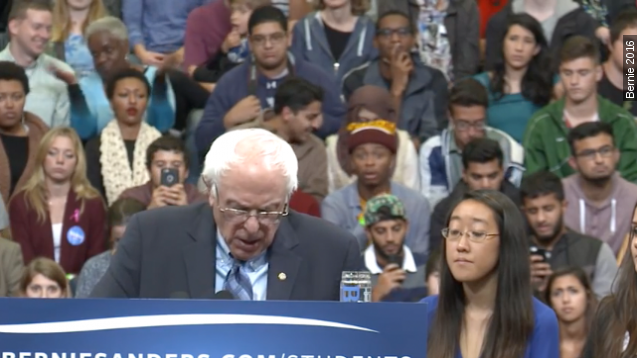 "In my view, the time is long overdue for us to remove the federal prohibition on marijuana," Sanders said. (Video via Bernie 2016)

Now, that guy's reaction in the video is getting pretty much the same amount of attention as what Sanders proposed, complete with its own Vines, YouTube edits and more. He also seems to mutter, "Oh ..." — and we'll say — "shoot."

As for the marijuana proposal itself, this isn’t the first time Sanders has taken that stance. In fact, he’s made this a talking point since the first Democratic debate, but his past relationship with the issue is a bit more — um — hazy. (Video via CNN)

In 2001, Sanders co-sponsored a bill that would allow states to legalize the drug for medical uses.

But when Katie Couric asked him about his thoughts on legalization earlier this year, Sanders dodged the question, saying, "It's not my thing ..." but voiced concerns that it might be a gateway drug. (Video via Yahoo)

Sanders has never outright opposed marijuana, though. He has supported decriminalization, which is different from legalization, for a while and has been a longtime opponent of the war on drugs.

For most of his campaign, Sanders took a wait-and-see approach to marijuana, citing Colorado and Washington as good test cases. But for now, at least, he seems convinced, and it's certainly caught the attention of others.