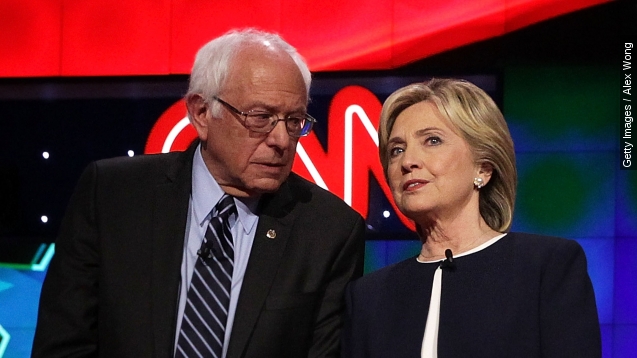 SMS
Sanders, Clinton Camps Spar Over Breached Firewall
By Matt Picht
By Matt Picht
December 18, 2015
A software error at the Democratic National Committee has led to a lawsuit from Bernie Sanders' campaign, and accusations of theft from Clinton's.
SHOW TRANSCRIPT

Right before its final debate of the year, the Democratic presidential field is getting some serious drama. Bernie Sanders' campaign has filed a lawsuit against the Democratic National Committee and is butting heads with Hillary Clinton's campaign over some mishandled voter data.

The dispute centers on the DNC's database on Democratic voters, which is ordinarily partitioned to prevent rival candidates from rifling through opponents' files. A vendor mistake briefly took that firewall down — allowing four Sanders staffers to access Clinton's information. One of those staffers has been fired.

Fired staffer Josh Uretsky told MSNBC, "The analogy would be, if somebody leaves the front door open, and you left a note inside the front door saying 'You left the door open.'"

The Clinton campaign is accusing Sanders' organization of stealing invaluable info, and the DNC has cut off Sanders' access to the database while it investigates. However, the Sanders team says it doesn't have any of Clinton's data and blamed the software vendor for the breach. Its lawsuit accuses the DNC of trying to "tip the scales" of the primary by withholding database access.

The issue is critical for Sanders; losing the voter database could severely harm his fundraising and organizing ability. For Sanders' supporters, the whole affair reinforces the narrative that the DNC is prematurely throwing its weight behind Clinton.

As for Clinton staffers, they're accusing Sanders' team of two things: absconding with critical campaign data, and portraying themselves as the victims in order to fundraise off the incident. They want to make sure any stolen data is destroyed before Sanders has his DNC database credentials restored.