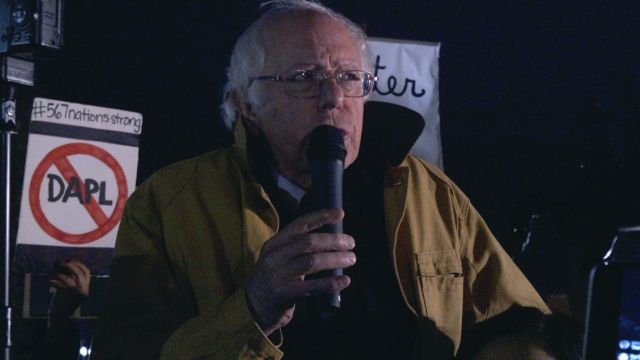 "So we say to President Obama, in any and every way you can, stop the pipeline. ... And if there are other approaches, such as declaring Standing Rock a federal monument, let's do that," Sanders said.

Sanders was speaking in front of the White House as part of an international day of action in more than 300 cities across the country and the world.

In the U.S., most of the protests were happening at U.S. Army Corps of Engineers offices. In Washington, D.C., #NoDAPL activists held a peaceful sit-in at the corps' national headquarters. The action was a call on the corps to stop the pipeline. On Monday, the corps said it had completed its study but still needed more information before it could allow the pipeline to be built along its planned route.

The Washington, D.C., rally-goers walked past Trump International Hotel and stopped for a moment of prayer. President-elect Donald Trump has investments in the company behind the Dakota Access Pipeline, and that company's CEO donated to Trump's campaign, according to The Guardian.

"We have a new president coming in who wants this country to be more dependent on fossil fuel. ... What we have to tell Mr. Trump and everybody else is that we are not going silently into the night," Sanders told the crowd in front of the White House.